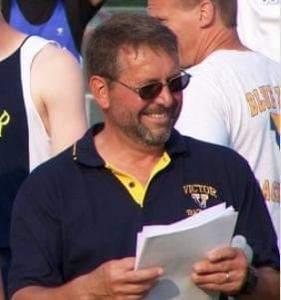 Red Jacket lost a true legend Friday night.
Red Jacket Class of 1967, three sport athlete, Bob Goodell, Sr., passed away after a long and courageous battle with cancer.
Red Jacket is where Bob got his first start with competitive running. Back in the 1960's, while Bob attended Red Jacket, he was a member of the track team. While on that team, his running career began. He set a school record in the two mile--that record is so impressive that it still stands today!
Bob was a retired science teacher from the Newark CSD. In 1971, he began a hall of fame coaching career in both cross country and track and field. Bob was a member of the Red Jacket and SUNYAC (Brockport) Hall of Fames for his athletic accomplishments. Bob has been recognized for numerous awards and honors throughout his 46 year coaching career.
We ask that you please keep the entire Goodell family in your thoughts and prayers during this very difficult time.
https://www.halstedpatrickfuneralhome.com/notices/Robert-Goodell